“Fire” was born in the spirit of determination at a time when everything that could go wrong…did.  A swarm of negative characters had made a habit of following me around, constantly pointing out my perceived flaws and weaknesses.  No matter what I did, I couldn’t shake them.  During this time, there was a flood…and I mean an actual, real life, flood.  The water was (literally) rising around me, and that’s when the little voice in my head said “You can do this. You’re made of fire…and fire is a lot stronger than water” 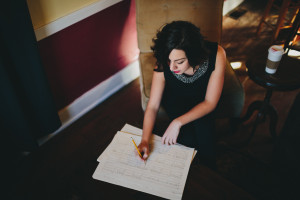 It was then that I realized all of those nasty little characters were just insignificant droplets of water, and that fire was the only thing that could stop them dead in their tracks.  As I sat at the piano and started to write, I knew this song was going to be special- not just to myself- but to anyone who has ever felt picked at, scrutinized, or bullied.

“Fire” is meant to be an anthem of perseverance.  A song to sing, share and believe in. My hope is that it will inspire listeners to never give up the same way that it has inspired me time and time again.  Victor said it best:

Join us in celebrating the 58th Annual Grammy Awards on CBS February 15th, 2016! For more information on the Grammy’s, visit Grammy.org

Listen to the Full Audio Track of “FIRE”